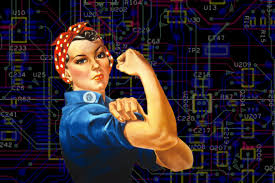 Yesterday was International Women’s Day.  It’s a day where we celebrate Madame Curie, recognize women’s accomplishments and struggles across the globe, and pat ourselves on the back for “coming so far”.  But what if we didn’t?  What if we looked at the situation of women, not as a retrospective, but as a projection?  How would our worlds collide if we conceptualized women were the next leaders in business?  In politics? Georgia was named last year as the number one state for fastest growing women owned businesses.  Unmarried women also make up the largest voting bloc in not only the state, but in the nation.  According to MassMutual Financial Group, senior women age 50 and older control net worth of $19 trillion and own more than three-fourths of the nation’s financial wealth.

If women are owning more businesses, have more wealth, and hold more votes, wouldn’t it make sense to consider their interests when making our states’ economic and business plans?  I ask this in response to a couple of articles and propose that Georgia, if wisely positioned, could be set to be bold in business, make leaps for women, and all while not having to acquiesce the tax revenue normally sacrificed on the altar of attracting economic development.

In Newsweek, a recent article spoke of the cold reception women in tech start-ups are getting in a male-dominated environment.  The LA Times report that women are leaving the tech industry in droves in California.  This cannot be because women all of a sudden changed their interest in their work, their STEM education background, or because California doesn’t provide a temperate climate. Women are leaving California because even in “progressive” states, they are being underestimated, shut- out, and undermined in business.  While this is disappointing, no need to cry over spilled milk.  Further, I have no interest in missing an opportunity that Georgia may capitalize upon as we weigh tax credits for the film industry, renaming our tech schools as “career academies” and attempt to resolve our transportation woes.

As the General assembly weighs the pros and cons of each bill, our Department of Economic Development is busy traversing the nation, inviting businesses large and small to come to Georgia.  What they have already witnessed is that Georgia’s tech industry, particularly for women is growing gang-busters.  So why do I feel that Georgia may be an excellent alternative for tech-savvy women?

According to Georgia Trend, Georgia has exponential growth in the development of healthcare information technology and software and apps development (those cool little things you download on your phone make a ton of money for our state), and in our state (for whatever reason) women are flocking to our tech businesses.  For the first time EVER we have a female president of the Metro-Atlanta Chamber, and even our local Chambers have long had women at the helm.  We also have a very well developed Women In Technology chapter affiliated with the Technology Association of Georgia, which is working to establish half of all tech jobs in Georgia to be held by women by 2020.

“It is not the strongest of the species that survive, nor the most intelligent, but the one most responsive to ‪change.” -Charles Darwin