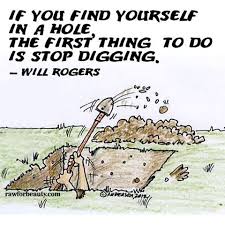 When you find yourself in a hole, please stop digging.

Some months back I penned a piece about my new home county becoming ground zero for the Post-Trump era.  Unfortunately I find the saga of Commissioner Tommy Hunter continues this morning as I read the Atlanta Journal & Constitution.  The AJC has brought to light the grating words of my commissioner’s attorney in a request for an evasion of an Ethics Panel.  The particularly troubling part is the misappropriation of terms referring to “political lynching”.  Lynching has a long and sordid history here, God help us, as my home rests in the same town that once was the home of the Grand Dragon of the KKK.  The spate of images the term lynching brings up does not lend any help to a man who referred to a Civil Rights icon as a “racist pig”.  Generally one wishes to avoid those images being associated with their name, but in the post-Trump era, now white, property-owning men are now the victims of racism.

Language is a strange and powerful thing, is it not?

Between you and me, I always find it interesting/amusing when political figures try to evade ethics rulings.  Aside from an issue of optics, Southern states have never particularly been known for strict ethics.  So why not just go before the panel, take it on the chin, and move on?  In a few election cycles, you could probably run again.  The general electorate will not remember, sadly.  As a populace, Georgians tend to care less about being nitpicky as long as their electeds are achieving the goals of promoting safety, prosperity, and liberty above all.  These have always been moving targets, but the point is, we do not generally care with whom you keep company, what your vice of preference may be, and with the right social graces, we don’t even care what your beginnings may have been.

Galloway wisely notes that the attorney here has employed a cattle rustling reference to lynching.  This made me wonder if either the attorney is not from here, is tone-deaf (highly unlikely), or is trying to re-appropriate a term that associates victimization with minority communities to a white, middle class, property-owning man in Georgia to further dig in his clients’ heels and turn the issue of racism on its head.    Dwight Thomas references integrating Avondale High School in 1966 on his website so my first theory is decidedly incorrect.  Thomas is no stranger to politically questionable and controversial characters though, as he also previously represented Vernon Jones.

This seems to fit what I know of the Hunter entourage.  Hunter’s spokesperson is Seth Weathers, who is rumored to have been banned from the 1818 Club in Gwinnett County for sending pictures of his genitalia to a female bartender.  He was also later a part of the Trump campaign in Georgia until he supposedly showed up inebriated to a meeting with campaign big wigs.  To be clear: I was not present in either circle, so I am depending upon the rumor mill of Capitol and social circles within which I belong.

My commissioner has decided not to go quietly into that good night, and he has surrounded himself with an echo chamber of folks who are known for other questionable activities. So as I impatiently wait for Gwinnett County to finally get around to extending MARTA out here, I now also have to put up with the poor strategic choices of a political figure who prefers bridge burning to bridge building.