Republican district conventions were held across Georgia today. This cycle is the first time I’ve ever participated in this process, and it was a rather eye-opening experience for me.

The various speakers were pretty much what I expected.

The elections were uneventful.

I understand the importance of expressing our shared belief and affirming our common principles, however, today’s brush with the resolution process has left me wary of the entire concept. Nearly every resolution from both the committee and the floor was a neatly wrapped bundle of hate and anger. I get it, there are problems in our government, but don’t y’all realize that no productive conversation ever began with, “this policy is brainwashing inspired by Satan”?

Here’s the thing: every angry issue has a positive solution. It is possible to offer opposition to an issue by presenting a good idea to fix it. For instance, compare these two (completely absurd) mock resolutions:

“WHEREAS comic sans is a worthless typeface.
WHEREAS the use of comic sans makes any document appear to have been created by a toddler with a marker.
WHEREAS it is generally agreed that no serious individual would ever use comic sans.
We hereby resolve to instruct the Georgia General Assembly to consider removing the typeface ‘comic sans’ from all computers designated for use by government officials.”

“WHEREAS Garamond is an aesthetically pleasing typeface.
WHEREAS the nature of the conservative is to conserve resources.
WHEREAS when printed Garamond uses less ink than other typefaces.
We hereby resolve to instruct the Georgia General Assembly to consider using Garamond as its exclusive typeface for all official government documents.”

So, at the end of the day, both resolutions express the desire to remove the possibility of comic sans being used by the Georgia State Government. One shouts into the wind how horrible everything is, and the other positively supports shared principles.

Now why does this matter? Our resolutions are the very public statements of our shared belief as a party. When the world only sees the first type of resolution, we become the people who are always complaining but have no solutions. If we want to be perceived as people who have some answers (or at least ideas) to solve the problems we’re facing, then we need to use our collective voice to advance those ideas. 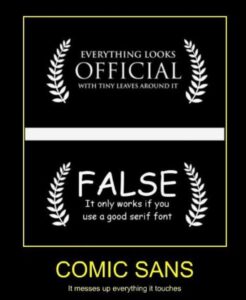 2 thoughts on “We Hereby Resolve…”