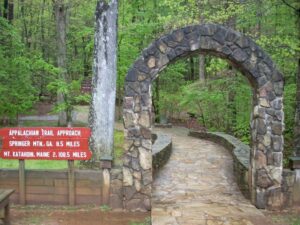 In more than a decade of Georgia politics, I’ve had the pleasure of sitting at tables of power that others may not have with both the House and the Senate.  I have watched the paths of policy and party emerge from a grassroots level to the fall of some mighty grasstops under Lt. Governor Taylor and Speaker Richardson.  I have been impressed with the larger vision of the present Governor and the efforts of the sitting legislative members to initiate justice reform, a transportation plan and now educational reform.  I’ve watched the rabbit holes of RFRA and the Guns Everywhere bill send the legislature in strange meandering paths so that I’m left wondering where are our markers?  What will be the footprints we leave for others to follow?  More importantly, if Georgia wishes to move forward, what tools will we employ to blaze new paths?

For me, I pulled out my phone and used its GPS system to get home.  The aerial image of Google maps and the signal from my phone helped to guide me through the literal woods to the nearest road and I walked it back to my cabin.  A far more challenging hike was had than I had planned for the day, but certainly not out of the realm of my capabilities.  Getting off course left me depleted and dehydrated but most significantly it was a waste of daylight.

As I do on many hikes, I contemplated politics and people and while thrashing about in the heat I wondered of what Georgia will be capable of addressing this legislative session?  The AJC’s Aaron Gould Shenin has already informed us of the Speaker’s interest in the unnecessary pastor protection legislation.  Most politicos recognize that this is the House leadership’s attempt to get out in front of the religious liberty debate this session.  I personally hope the legislation will curtail any tangential paths so that the legislature can focus on removing obstacles to industry and fostering economic growth.

The Georgia General Assembly consistently follows the policy leads of other states.  We’re wasting our sweet time comparing ourselves to our neighbors, Alabama, The Carolinas, and Florida. In reality we could be comparing ourselves to California and New York, but we won’t, because then legislative members will be chastised for being “too liberal” and “too urban”. In truth, Georgia should be comparing itself to other countries. Georgia’s economy is larger than most other national economies across the globe. Savannah has one of the busiest ports in the world, one of the few that has a relatively equal trade balance. Atlanta has the busiest airport in the world, and the state is fast becoming the new center of film production in the United States. Remember California and New York? Yeah, they are the only ones ahead of us, and these facts leave them nervous as a long-tailed cat in a room full of rocking chairs.

On the road to national economic development and education reform, Georgia can blaze the trail.  If we set our eyes on the horizon rather than simply aspiring to reach the shelter points of other states, Georgia could be a trailhead for more than just the AT.

No Pain, No Rain, no Maine- Annonymous