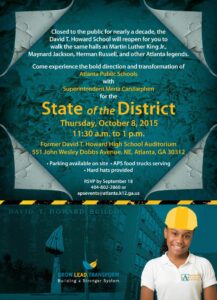 The Atlanta Public School System has gotten a lot of flak in recent history.  The cheating scandal, the concurrent contract with Erin Hames, etc. have cast a shadow on the reputation of the city’s school system overall.  Yet, if we go back further, APS should be credited with producing some of Georgia’s historic greats: Martin Luther King, Jr., Maynard Jackson, and Herman Russell.  It looks like they are trying to revive and reignite that vibrant history.

How delightful was it then for me to receive in my inbox an invitation to attend the re-opening of the David T. Howard School?   The city will host its State of the District address at this location, where attendees may walk the same halls as these past city giants.  Whether a resident of the Atlanta Public School District or not, this is a historic moment for the “city too busy to hate” and its children.