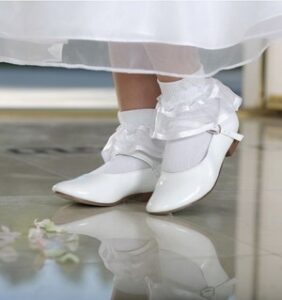 It seems that Mike Griffin has finally pissed off Baptists other than just me.  Even the white patent shoe wearing, floppy-Bible-toting stock get irritated when you compare them to a totalitarian.

Aaron Gould Shenin of the AJC quotes members from the floor in his post, identifying his comparison of lawmakers to Hitler as beyond the pale.  There are many more Baptists than those quoted at the Capitol, many who have long considered Griffin to be Satan incarnate, but I am rather glad to invite others to the party.  All are welcome at this table!

On the matter of being Baptist: I have been and cannot imagine myself to ever separate from the title of Baptist, no matter how many Mike Griffins, Jerry Falwells, or Westboro Baptists there may be.  In addition to that preference, I also have always loved my scotch neat, I rarely miss a chance to break it down on the dance floor, have been and will forever be solidly pro-choice, and as for my card playing abilities? My middle school girl friends can vouch for the repercussions of our serious games of five card draw.

If you are of the misconceived notion that Baptists are unilaterally characterized by the opposite of the above mentioned actions, I am here to tell you Baptist is a big, broad tent that welcomes sinners of all stripes.  Like all Christians, we believe devoutly in the salvation of our souls given mercifully and unconditionally by God.  There are some who believe in the sacrificial atonement of sins in the death of Jesus the Christ, and there are some who do not.  Yet Baptists go further beyond the belief of merciful salvation and are somewhat unique in our deeply held convictions around full immersion baptism and regarding a term called congregational polity, where every church is self-governed, autonomous from the fold as a whole, and independent.  Quakers, Puritans, and many of the congregational churches created in the American colonies were cut from this cloth.  Unitarian Universalists, some synagogues, and mosques employ a version of this as well, but Baptists are often the denomination to be identified with this in mainstream Protestantism.

For this reason alone I have deeply held convictions against ANYONE saying they represent all Baptists.  We are organized differently for this VERY reason.  So for Mr. Griffin to assert he speaks for “us” is to be not only challenging to comprehend, it is organizationally impossible.

In American history there have been many Baptists who stood in opposition to Mr. Griffin’s assertions about the involvement of church and state.  I would kindly recommend Mr. Griffin research more about fellow Baptist, Roger Williams and the Free Will Baptist movement, if he needs a refresher.  There have been a number of Baptists who have stood for religious liberty, but not for the type that Mr. Griffin is asserting.  If Mr. Griffin needs a further tutorial, I would encourage his reading of Brother to a Dragonfly, by the late Will Campbell, who believed in the widely-controversial-at-the-time belief that minorities should be treated with respect, and that the Bible’s scriptures were often misrepresented in pulpits across the South in their endorsement of the institution of slavery.  If Mr. Griffin needs to see this in action, he could always head down south to Koinonia Farms.  It is still there, and still living out the Cotton Patch Gospel.

Now this is not to say that Baptists are not aware of politics, nor do we not wish to be involved.  Oh no.  We are the people who typically employ Roberts Rules of Order to debate the purchase of a weed-whacker.

Y’all wanna know about proper procedure?  Step in ANY Baptist church in the Southeast and propose a change to their worship style.

You see, we Baptists are heavy-handed in our belief in bottom-up process.  We are TERRIBLY populist, and we will split off and start a new church if you so much as say our Mamma’s meringue on her Banana Pudding is too brown.  No joke.

So why should this Scarlet ask you to give a damn?

Because on Sunday morning, Governor and Mrs. Deal are going to sit down in their pew in the First Baptist of Gainesville, where this has been an on-going church debate.  It is my understanding that the First Baptist of Gainesville has prohibited marriage of anyone other than a man and a woman.  Many other Baptist legislators will attend their legislative committee meetings, and then head home to their Deacons’ meetings, and to serve on church committees with individuals who feel vastly different than they do on this issue.  No one will call them Hitler to their face, but they will be isolated and segregated from the whole in more subtle ways- missed invitations to church socials, showers, covered dish suppers, and retreats.

I can say from personal experience that it is easy to hurl criticism in the media but it is inherently awkard to share a pew with a believer who has expressed different beliefs than me.  It gets reeeeeal personal REAL quick.

So what is the upside?

Aside from living as all Christians have been called, to love and respect one another, these legislators get a front row seat to the full redemptive power of the One who is yet to come.  The belief in the Divine Trinity calls us to believe in second chances, forgiveness, and unyielding grace- no matter what or who is before us, even if his name is Mike Griffin.  This faith is not simply to bear a label, but to be dynamic in moving mountains.  We are called to serve.  Sometimes those mountains of service will be in the form of policy, played out in the marbled halls of the Capitol.  Other times it will be to close the gap on the pew.  Some efforts make it to the press, but know that many do not.  These legislators and our Governor are living out their faith by their actions, not by standing on the sidelines.  Let them be recognized for this, not just as recipients of the name-calling of one who asserts he represents a certain denomination.

“While there have been many excellent translations of the Scriptures into modern English, they still have left us stranded in some faraway land in the long-distant past. We need to have the good news come to us not only in our own tongue but in our own time. We want to be participants in the faith, not merely ­spectators.” ~Clarence Jordan