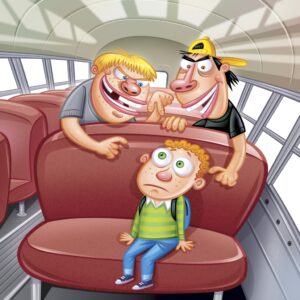 Last week, my boy child brought home a flier in his very boy backpack (i.e.: smelly, unorganized, with snacks from before Christmas in there) about bullying and a school-wide effort to stop it.  After smoothing the flier out and flicking jelly off of it, we sat down at dinner to discuss what bullying. We talked about using our kind words and gentle hands and feet; we discussed that everyone is different and special…yes, even his sister.

The next morning I heard a voice from the television that made the hair on the back of my neck stand up.  I wasn’t sure if it was Sponge Bob or The Donald, as both have the same effect on me.  So I go to the source, and it’s a news piece depicting some pretty heavy vitriol from The Donald.  The television went off immediately.

After some bickering about being allowed to watch the news on weekdays, I had to explain that it wasn’t appropriate viewing for said weekday.   A pair of big brown eyes looked at me, and a precious little mouth said, “Is Donald Trump going to get in trouble?  I got sent to Mrs. Winters’ office for not using my kind words.  She fussed at me forever! What’S HE gonna get?”

Parenting moment number 875,000 that’s not in books:  How to explain the horrid behavior of an adult who wants to lead the free world but doesn’t use his kind words?  I told my boy that Mr. Trump may not get into trouble like kids do, but that his words would come back to haunt him. “How will that happen?”  I had no idea.  “I’ll get back to you on this, okay?”

The more I thought about my boy’s questions and the actions of the men who want to be the Grand Old Party nominee, the less sage advice I had.  All I could think of was that these men are ruining our kids! And I was party to it by allowing them to watch the news.

We preach being kind, but these guys are bashing each other.

We have no tolerance for violence in our schools, but the news is filming adults hitting each other over politics.

We ask that our kids be kind, but they see adults hurling insults at each other like the neighborhood boys in a pissing match.

I never, in all of my life, would have thought that having my children watch political newscasts would turn into a moral lesson on being kind. I understand music videos, violent movies, and all the other stuff that we shield our kids from, but a political debate???

All of them need to be sent to Mrs. Winters’ office for a stern talking to because they are breaking all the rules that we teach our children in school and in life. We have moved from the POTUS being a position of class and deportment to being a position of thug, to a classless schoolyard brawl, to a debate on the size of one’s penis.

Children hear this, and they see this.  How can any of these Republican Candidates even take themselves seriously if a six year old thinks they are a bunch of bullies who need to be sent to the principal? So I called Mrs. Winters; maybe she can help get these boys in line.