On a recent trip to Charlotte, North Carolina, I had the opportunity to take in the city’s art and restaurant scene, which I would HIGHLY recommend to anyone for a weekend.  More than just giving me loads of inspiration, the visit called me to reflect/question how a city’s identity is constructed.  Does the run of the mill Jane Smith typically reflect more on the history of a city or the trends of the present before she visits?  And what draws people to each city?  What makes them move there?  What makes them stay?  What drives them away?  Me?  I like low taxes and a great art scene.  I like walkability and commerce.  Others like quiet and quaint, picturesque views and still more love the hustle and bustle of of big city life.  As I focused my lens on Charlotte, I tried to think how my own city projects itself to the world. 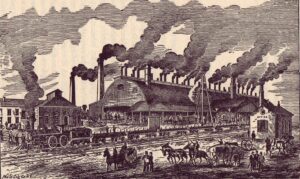 Atlanta has a rich history, long before rising from the ashes of the Civil War.  My city, named Terminus, for its rail identity was one that sprang up from necessity of business, trade, and transportation.  Long before she ever became the Gateway to the South, Atlanta was buzzing with people moving to and fro, selling their wares and has always had a more transient population as a result.  Locals here know there are few true “native” Atlantans, as most Georgians coming from small towns move here to either try their hand at making it “big” in the “big city” or to escape the narrowness of living in a small town straight out of Faulkner.  My story was similar: farm girl grows up in Social Circle.  Studies hard in small town and attends the women’s’ college (Agnes Scott College) in small town close to bigger city.

I always like to ask people I meet why they moved here.  I know why I did, but I assume different strokes for different folks.  The resounding answer I tend to get is for “jobs” and the opportunity for upward mobility.  Is this legacy of a business oriented city still true?  Are we really a city that allows outsiders to come in and pull themselves up by the bootstraps to “make it”?  If so, how are we continuing to foster that image and promote growing business?

Atlanta has done a great job of promoting itself as a city “too busy to hate” and a place whose Mayor tries to be responsive to his business community.  Most recently, Mayor Reed had his Bobby Kennedy moment in the spot light as he tried to calm the #BlackLivesMatter movement protests in the streets.  In many ways, he navigated the storm well, with respect for the protestors and the blue line.  The moment Reed welcomed peaceful protests in the streets of Atlanta while asking them to stay out of the expressway was a moment I was truly proud of him!  I wish more people in the nation had the opportunity to see that side of our city.  In a city with a black mayor, a black city council, county commission and school board, we know from the bottom to the top that #blacklivesmatter here.

Mountaintop moments did not end in Atlanta with MLK, Jr.

Many great non and for profit businesses call Atlanta home: the Blank Foundation, Chic Fil A Foundation, to Home Depot and that well-loved classic, Coca Cola.  From the West End to Buckhead we have a cultural, literary, and entertainment history that is uniquely Southern just as it is uniquely ours.  We are the city that gave the nation Gladys Knight, Gone With the Wind, Lewis Grizzard, Jane Fonda, Jeff Foxworthy, Tyler Perry, Ted Turner, John Portman, André 3000, and so very much more.  Our legacy from the shameful Grand Dragons of the KKK are just as undeniably a part of our identity as is So So Def.   Atlanta is a dynamic city, with all of the bumps and bruises to show for those growth pains.  With all of our past racial woes, Atlanta is still questioning ourselves on how to empower people to climb out of poverty, how to coexist peacefully and without segregating ourselves.  H/t to Maggie Lee, esteemed journalist, friend, and amazing data visualization guru for the awesome map.

And Atlanta has much more yet to show:

The Beltline, connecting 45 neighborhoods in the city by walking.  NYC has a similar walkable path, only much shorter, and it’s in the air!  No joke, check out the Highline. Up until last year, Georgia was second only to California for the sale of electric cars- which soon enough, will be able to be charged at 300 charging stations in the world’s busiest airport: Hartsfield-Jackson.  Our Governor continues to add to our job count by inviting in new companies- many of whom want to be centered in the city- not outside.  In turn they (and the general Atlanta populous under the age of 65) are demanding more public transit.

What more is there to do?  How can we continue this identity of business, trade and transportation?

Maybe other cities can offer some insight:  Charlotte’s public library has a Makerspace and Career Center, with tons of computers set up to job hunt.  The Makerspace is one that allows artists and inventors to create things via 3 D printing and other expensive tools without having to buy the tools themselves.  Charlotte’s has 3D printers, CAD stations, vinyl and laser cutters, sewing machines, knitting machines and a variety of tablet devices like the Nexus, Microsoft Surface Pro 3 and iPads. Other equipment includes: MakerBot Replicator, LulzBot Mini, Epilog Laser Engraver/Cutter, Roland Vinyl Cutter and three desktop computers.  Check it out here. It allows for prototypes and models to be made for tests and proposals as a way to contribute to the thought space without requiring a hefty membership fee like the Atlanta Tech Village.

While visiting Greenwich Village recently, I had the pleasure of stumbling upon an old church at 10th and sixth that had been converted into a public library, complete with plugins for laptops, free WiFi and a firsthand study of period architecture.  It was a vital conversion, maintaining the artistic and architectural integrity of the building but modernizing the structure so that it contributes to the community, not simply as visually appealing, but a place for convening and education.  Could Atlanta not do the same with The Abbey, in between North Avenue and Ponce de

Leon?  Or at the very least, can we at least make some strong improvements in the preservation of the Central Library?  Savannah College of Art and Design has already successfully converted and preserved Ivey Hall in Altanta and Broughton St. in Savannah.  I say let have at it for the Atlanta skyline as well!  The need for the coexistence of the modern convenience with the classic infrastructure is nothing new to dynamic city identity. So too, the free WiFi on the NYC transit was impressive.  While Atlanta is still inhibiting our own upward mobility by delaying transit options, NYC is offering free WiFi so you’re commute can be more enjoyable!

Atlanta has the opportunity to up its identity game.  We should not be competing with Birmingham, and Baton Rouge.  We need to set our sights on L.A., NYC, and Chicago.  We can go beyond the basics.  We have the cultural, literary and architectural history.  We have the people, the will for forward motion and the dynamic innovations that can propel our city and its legacy forward.  I look forward to seeing what new identity the City of Atlanta will claim next.