Elections day is less than a week away, and for many that’s not soon enough. However, down ballot of the Trump-Clinton circus are actually pretty impactful candidates and issues, including four constitutional amendments.

In brief, they are:

Amendment 1, Opportunity School District: This is a piece of legislation that allows the state to take control of chronically failing schools, as measured by the state’s annual College and Career Ready Performance Index or CCRPI. (Full disclosure: I wrote in opposition to this bill here).

Amendment 2, Safe Harbor Fund: Creates new taxes/fees which will be dedicated to funding support services for survivors of child sex trafficking. (I wrote about this amendment, as well, here).

Amendment 3, Judicial Qualifications Commission: Abolishes the current JQC and recreates a new commission that would be made up solely of political appointees. This body oversees ethics complaints against judges. (Oops, can’t hide my dislike of this sleazy measure).

Amendment 4, Fireworks: Like Amendment 2, this creates a new dedicated fund, in this case to support trauma care, firefighter training, and public safety services. (No, I have not written about this one. Why are fireworks such a big deal in this state?).

Check out the ballot guide from the YWCA of Greater Atlanta for good, in-depth analysis of the amendments.

What can you learn?

Pulling up the disclosures is a fairly quick process, you just need ten minutes. In this year’s batch of reports you can find out what measure(s) AT&T is backing, what Washington D.C. groups have donated to these amendment fights, what legislators are involved in these projects, and what measures the Walton family (of Wal-Mart fame) have put money behind.

Everyone likes to toss around this claim about the “other” side of a policy debate: special interest, out of state money! coming in to ruin real Georgia values! There are, indeed, small numbers of very wealthy people who can dump tons of money into political issues they care about, because we live in a nation that faces such severe income and wealth stratification that that’s possible. Lots of in-state groups solicit and benefit from out-of-state money; it’s not a surprising phenomenon. These donations can and should still be interrogated, but are quite common.

As in Part 1 of this series, financial disclosure reports reveal how different people and organizations are connected to each other. Are they people and organizations that share your values? How are political leaders connected to the funding of these amendments? This may require a little more googling to figure out exactly who is involved, as oftentimes intermediaries are making large donations to the groups campaigning for or against a constitutional amendment, but it’s definitely a rewarding process.

As an example, let’s to go through the campaign report for Yes2SaveLives, Inc., which was involved in a 2010 campaign to support an amendment to raise funds for trauma care. This example does not use current campaign information.

Here is the document you will see when you pull up amendment campaign finance disclosures (link here). Note the Chairperson and Treasurer on the summary page. A quick google search reveals that Israel was the President and CEO of the Georgia Chamber of Commerce. Joe Parker was the President of the Georgia Hospital Association. So GCC and GHA were heavily invested and likely leading this campaign (more confirmation of this later).

Googling the address or P.O. Box listed might also tell you information about affiliated business or organizational interests. Often, technically separate organizations, like the c(3) and c(4) arms of an organization, might share an office and thus an address. 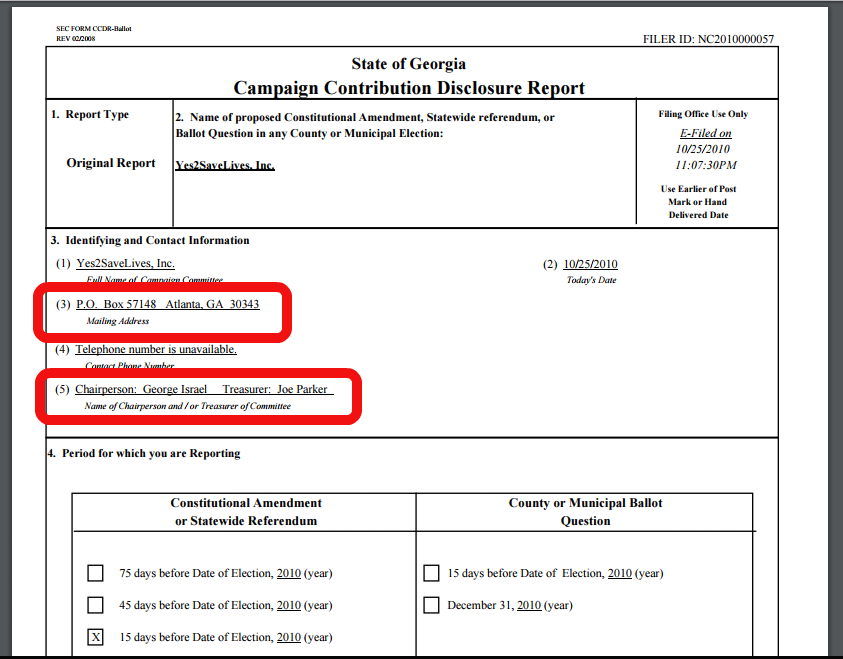 Next up is the summary of their fundraising and expenditures. This group fundraised over $3.1 million (line 6) from their inception in August to the date this was submitted, and they spent $2.3 million (line 12, not pictured) of that in the same time period. The $1.25 million figure in line 3 (wow this feels just like doing taxes!) is the number this report will break down into individual donors.

And now…what people and organizations make up the $1.25 million in donations?

Children’s Healthcare of Atlanta and Columbus Medical Center were both big donors. Additional confirmation that the GCC was heavily invested in this issue; not only was their President the Chairperson of Yes2SaveLives, but the GCC is “donating” office spaces and related services. As you scroll through the document, you’ll see the same holds true for GHA. The donors this filing period were 100 percent in-state medical institutions, so it’s clear they were very invested in this.

Interpretation if you opposed the measure: hospitals are spending big bucks to pass this special interest measure that will line their pockets; we should never raise taxes, especially not to benefit these corporate interests.

Interpretation if you supported the measure: deaths from traumatic injuries are 20 percent higher than the national average because of lack of access to care, and medical groups recognize the urgent need for a well-funded trauma care system in Georgia to prevent these unnecessary deaths. 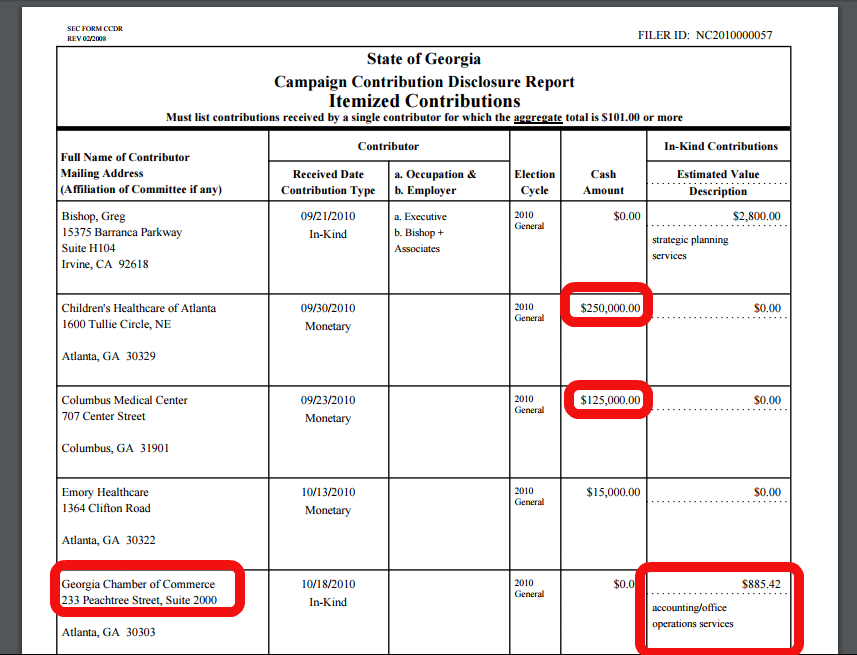 Not shown are loans and itemized expenditures. Still worth perusing, but often not as great a source of information.

If you are interested and looking at these reports for the current campaigns for and against the various amendments, here’s how to do it:

(1) Go to ethics.ga.gov, which is the home of the Georgia Government Transparency and State Finance Commission, formerly known as the State Ethics Commission. Along the black bar at the top of the page, select “Search.” 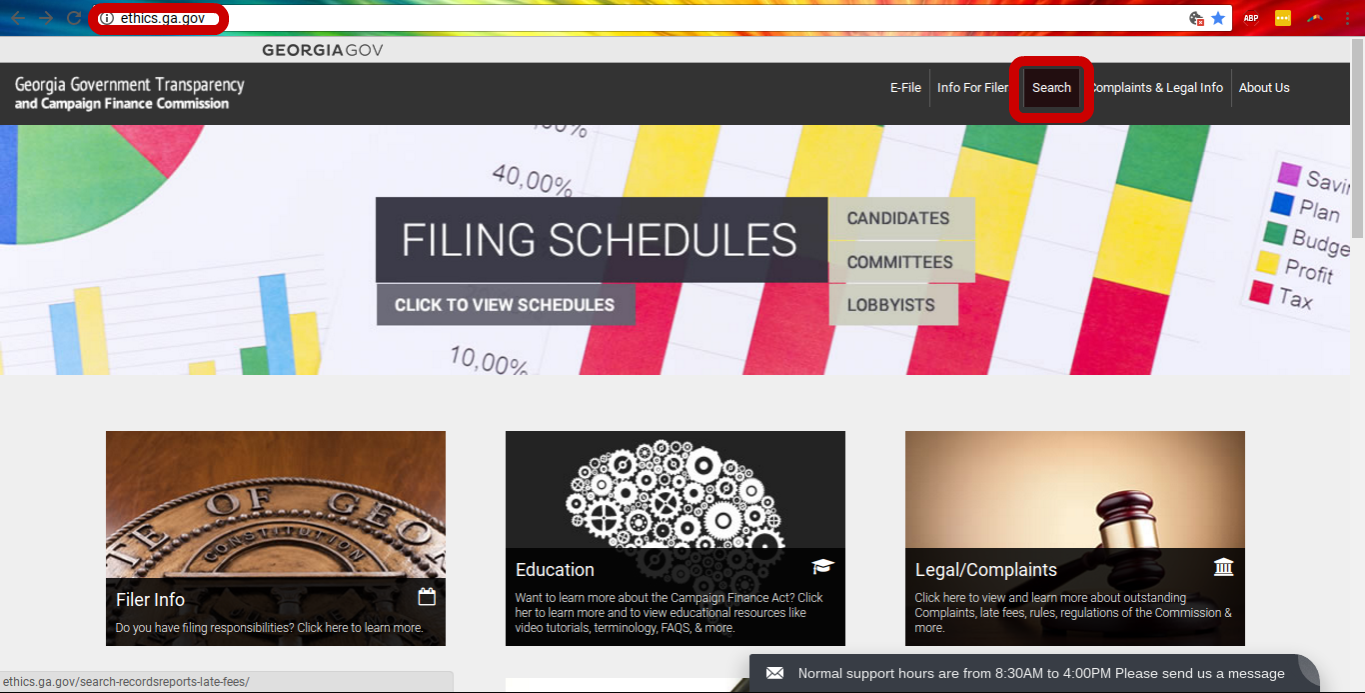 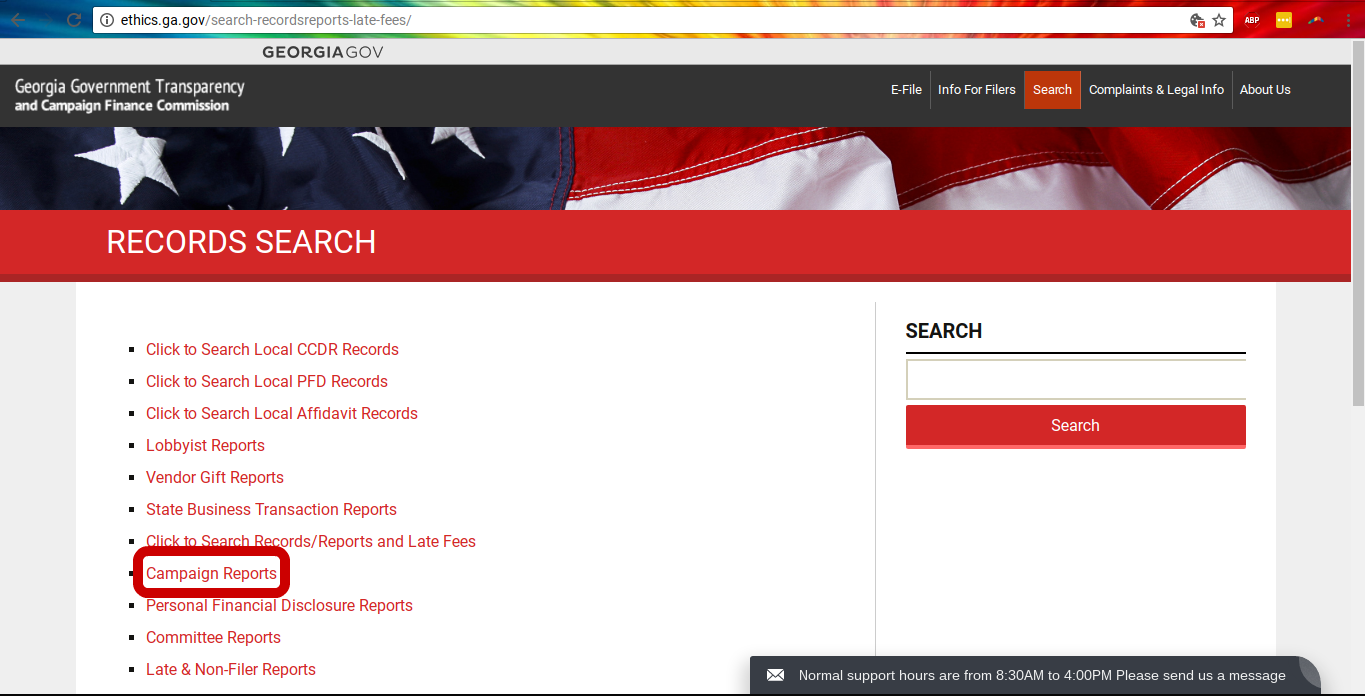 Amendment 3: Georgians for Judicial Integrity; Save the JQC-Vote No on 3

(4) Select “View” next to the name of the committee. 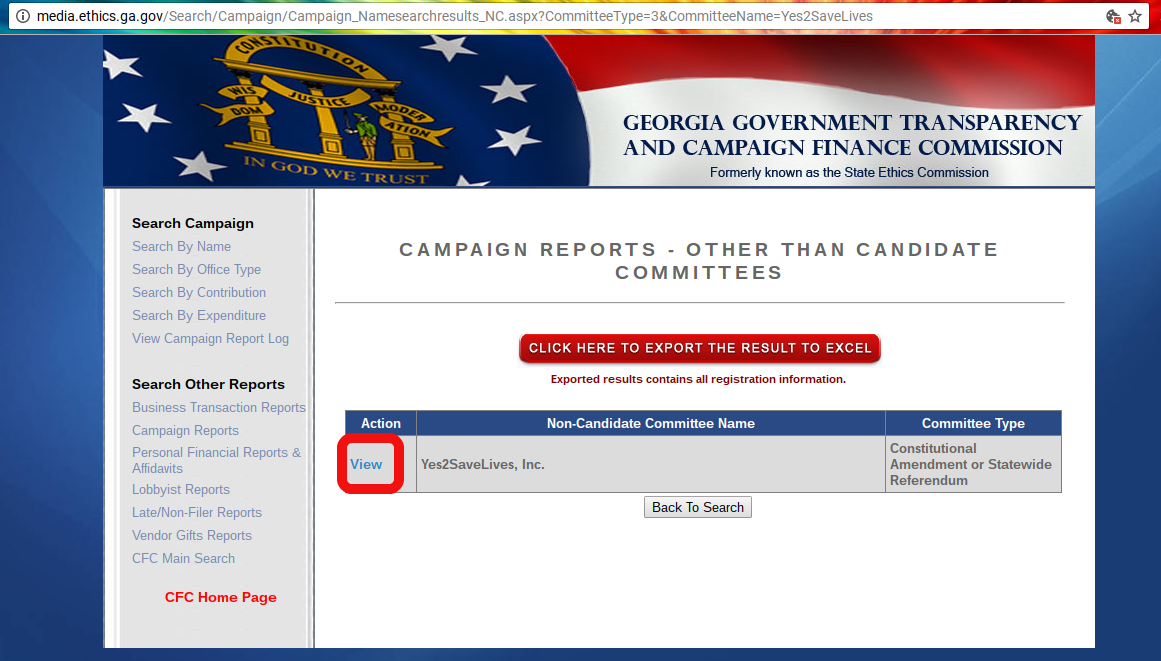 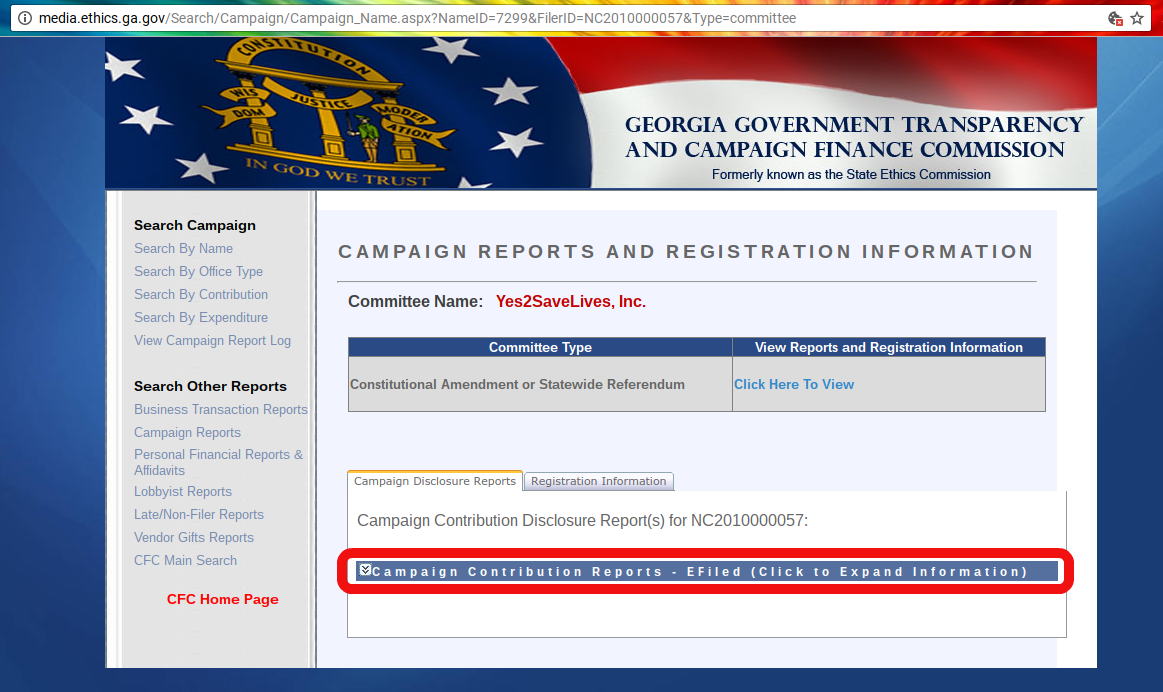 (6) Select “View Report.” Everyone should have their “15 days Before Date of Election” report filed by now. 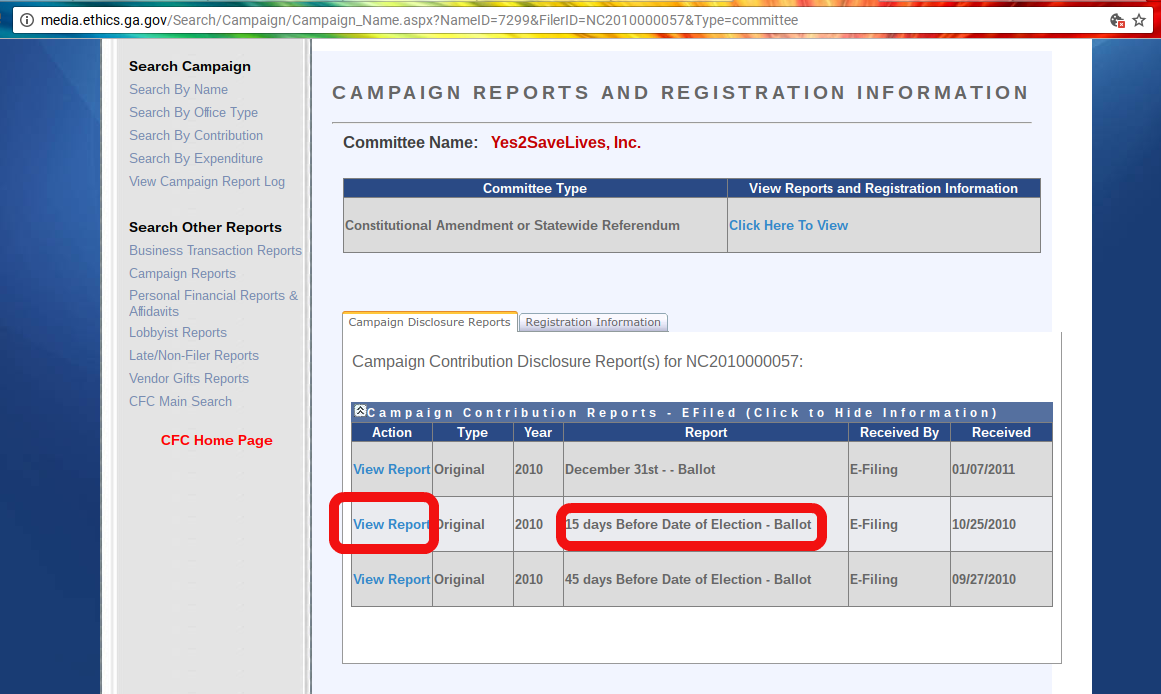 (7) Select “View Report in PDF,” to take a look at the entire report. (The other options are more excel friendly versions of the same information, broken into segments). 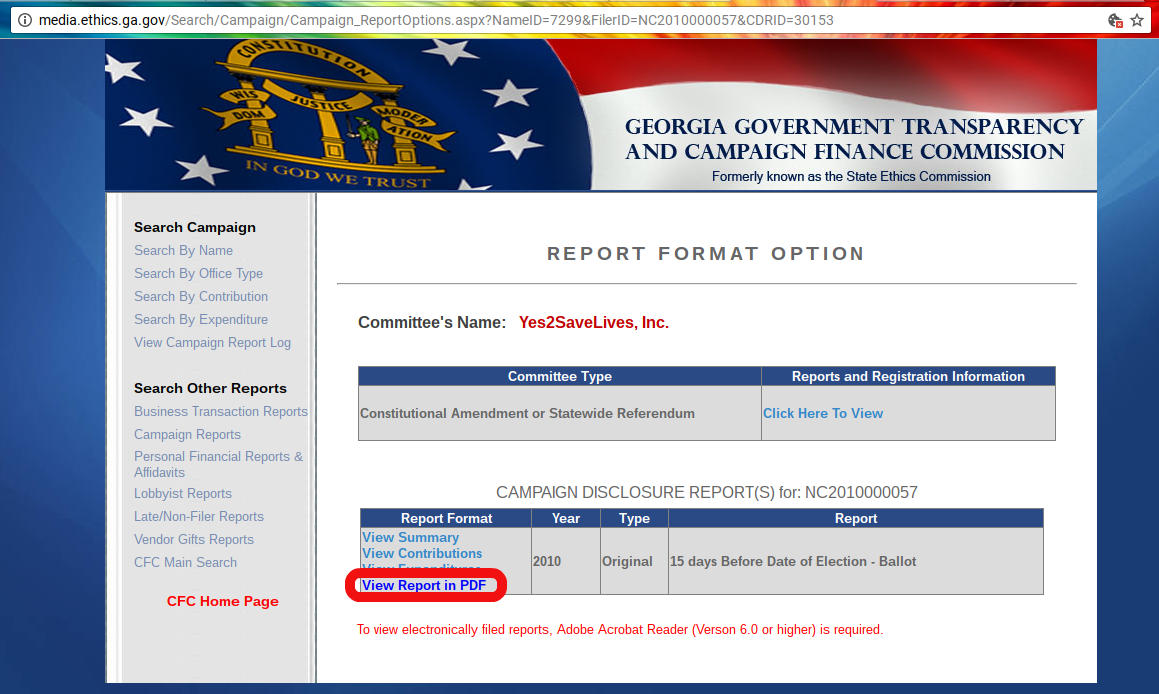 Passing constitutional amendments is quite involved. First, both bodies of the Georgia General Assembly must pass the legislation with a two-thirds majority. Right now, Republicans only have a two-thirds majority in the State Senate (so Democrats only have to co-sign if some of the far right Republicans aren’t backing the party agenda). In the House of Representatives, Republicans do not have a two-thirds majority, so at least some Democrats must also vote for a constitutional amendment for it to pass. Then it goes before the Governor, who has the ability to veto it. Then it goes before voters, where it must pass by a simple majority.

Fun facts: the only thing the General Assembly is constitutionally mandated to do is pass a balanced budget each year, everything else is just gravy. Legislators are also constitutionally protected from arrest during the legislative session!

Comment with any questions or just to let me know what you dig up.